In addition to shouting out a favorite spooky movie every day in October, I'll still be watching and rewatching other movies and talking about them. Here's what I've seen lately.

Okay, this is officially the most 80s horror movie ever, just beating out Chopping Mall. This covers ALL the bases, there's even a trying-on-clothes montage (including boobs, because 80s). I wouldn't try on clothes without a bra, so I'm calling shenanigans. There's a nerdy guy, a sexed-up couple, and of course, an escaped mental patient with a not-so-mysterious connection to our final girl, whose name is LAURA. Spoiler: he's her BROTHER! I'm guessing her last name is Smode. There are lots of jump scares of the "oh no the killer is sneaking up on her oh wait it's just a frat guy acting like no sane person acts" variety. At the end we get the classic "he's dead" and NO HE'S NOT DEAD YOU IDIOTS, KILL HIM SOME MORE! Oh never mind, you're dead. At least nobody said "it's all over," that would assure his immortality. OH, and there are several Nightmare on Elm Street-esque dream sequences! Did I miss anything?? 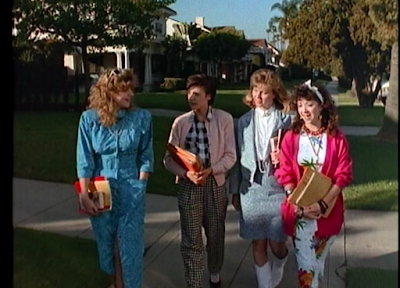 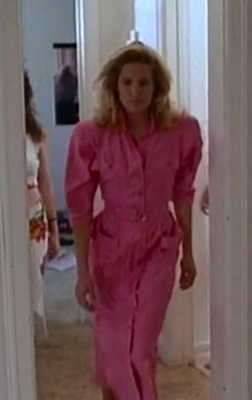 I think my favorite part was during the ending credits. I have questions.

If she really was Hammer, wouldn't she have yelled "U Can't Touch This!" as he was stealing her car? 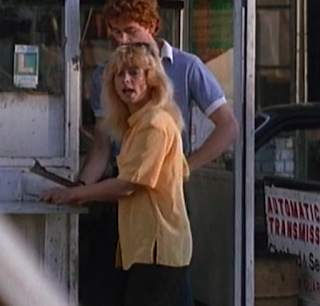 Yes, I pretty much wrote this whole thing so I could make that joke. WORTH IT.

Sorta recommended, but only for the outfits.

In theatres, I saw The House with a Clock in Its Walls (2018). I read and loved all the John Bellairs books this movie is based on, so I was pretty excited. And it did not disappoint. Sure, there's some silly kids' stuff, but there's also a lot of genuinely creepy stuff, as well as heart and great performances by Jack Black and Cate Blanchett. This really reminded me of watching scary movies as a kid in the 80s (including the 50s setting. The 80s were obsessed with the 50s). Suitable for kids, but with just that little edge to creep you out for days. I still remember how much I loved that feeling as a kid, and watching this as an adult you kinda relive it.

It lets you imagine a time when a witch might have had a purple house to match her aesthetic, instead of how homogenized everything is now. And it has the greatest of all messages, which is "FUCK NORMAL." Oh and this was directed by Eli Roth, who I usually avoid like the plague. I think he might have found his calling.

Next up is Wolfcop (2014). That's one word, wolfcop. Here's one more word, badass! A beleaguered, alcoholic small town cop becomes a werewolf. I'm not gonna go into too much detail on this one bc spoilers, but I will say werewolves can be tough to pull off and this pretty much nailed it. For a low budget movie, the transformation scenes are really scary and well done. Good performances, a unique setting and premise, lots of fun moments, and even a non-obvious twist ending.

Rifftrax: The Bermuda Triangle ~ This movie was WAY TOO LONG with a lot of slow parts, but I actually kind of enjoyed it at its core. Trim off maybe 20 minutes and you've got a spooky little story, complete with Creepy Little Girl™ with Creepy Doll™. Was that already a trope back in 1978? If not, congrats on being ahead of the curve, Bermuda Triangle! I wouldn't recommend this without Rifftrax because of all the slow stuff.
Posted by emperorcupcake at 12:20 PM

It's that time of year!

Let's start the greatest season with my Rocktoberfest 2018 playlist. 2 songs for each spooktacular day! What a deal!

I have a fun & active October planned, so stay tuned.
Posted by emperorcupcake at 3:12 PM